Nutritionists, trainers and doctors all start their day with coffee but each have a twist to keep it healthy. 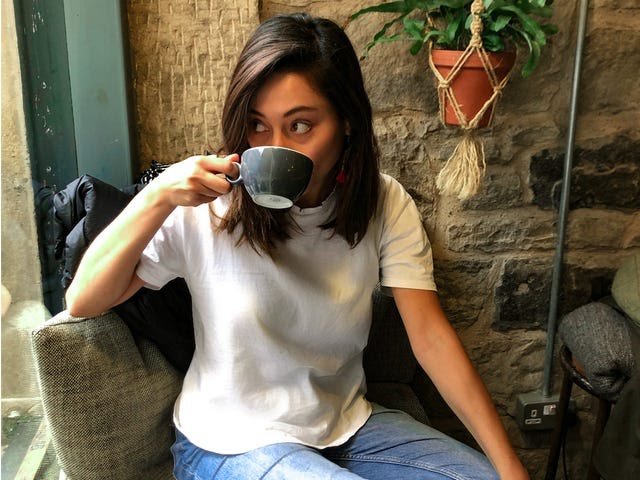 This young adult tries coffee for a week, after never having it before. Enjoys the routine but read what happens on Saturday.

Jablum Gold is made of beans from the Jamaica Blue Mountains. These beans are not only handpicked on the farms, they are also curated in the factories to get the fattest beans and best taste. So no boudbr it’s made in low quantities.

Add peaberries which are made from 1 in every 10 beans on average, then add the duration process and you get an exceedingly rare Jablum Gold peaberries.

This coffee plays its part offering theatre from unpacking the beans, inspecting its pea like nature, smelling, then cupping.

Essentially it makes a great cup for the holidays. The tones are traditional chocolate and spice, but the peaberries give it a crisp tealike fruitiness and smoothness.

So what are people in the real world saying about Twiice edible cups. These cups merge the idea of removing the plastic waste from your brew and replacing it with a biscotti cookie cup. So you just eat your mug after your morning coffee or tea.

Myriad of comments on social platforms likes the idea of reducing waste especially if it tastes great and complements the food.

But some concerns include training servers to hold the cup at the bottom rather than the side which people mainly eat.

Probably the biggest concern is cost. Six cups in a starter kit are selling for us$23. Even 23 New Zealand dollars remains a tall task. For any mass adoption, one needs to have a better product than the standard and also at a cheaper price. The price point therefore makes the product niche, and that’s ok.

It’s sold across New Zealand and also on the national airline. That’s very cool for the family start up.

In 2015, four family members joined creative forces to produce the product and scaled to the company. Jamie and Stephen (son and father), along with wives Simone and Theresa, always had a knack for the artistic and creative projects.

“Call us a family business, or simply a bunch of committed foodies who love getting stuck into a new project together,” they state on their website.

The source indicates that its a real possibility despite concerns about the Chinese market and the potential for unauthorised blending of beans.

“We have to try something,” added the source.

In 2011, the Coffee Industry of Jamaica (CIB) sent its first shipment of green beans to China. The CIB sent representatives to live in the country in order to streamline the supply chain. The deal signed with Zhejiang Dunn’s River Import and Export Company Limited, would handle the commercial transactions of the Hangzhou Coffee and Western Foods. The deal was met with ambivalence from some Japanese buyers who questioned the price at which the beans were sold to China. The deal with the major importer wasn’t continued after the initial two year attempt. But with the softening of the Japanese market the search for new markets are inevitable.As the industry can no longer avoid the world’s second largest economy.

Coffee shortage continues to affect the availability of Jamaica Blue Mountain JBM beans. Its based on a confluence of factors now led by drought.
Less beans resulted in price increases of roughly 40% in real terms to consumers. Interestingly small farmers benefit with box prices of coffee cherries inching past J$8,000 (U$70).
” I hear they paying up to J$9,500 a box,” a source indicated.
To consumers it resulted in a shortage of favourite brands.
For instance, the beans of large supplier Jablum remain out of stock–going three months now or since November. “We won’t have brand before April,” another source said this week.

Island Blue –beans are once again available in limited supplies