The Coffee Industry Board Jamaica (CIB) said the cess would finance local farmers.

“This recommendation to the minister was made after extensive consultations with the stakeholders in the coffee industry. The minister has publicly expressed his agreement with the proposal and he will, at the appropriate time and place, announce the amount of the cess and how it will be applied,” the CIB reportedly indicated to local media.

Jamaica Blue Mountain remains in short supply due to a confluence of factors now led by fires and the berry borer disease. Coffee exports totaled some US$13 million last year down from some US$25 million in  pre-crisis levels.

Marley Coffee offers one of the coolest brands from the Jamaica Blue Mountains. This coffee rocks with reggae chocolateness and R&B low acidity. Its led by Rohan Marley, the son of reggae legend Bob Marley, with operations in the US and Jamaica.

Its listed on the OTC Market in the US as Jammin Java and considered a penny stock with thin capitalisation. The team at Marley Coffee however want to change that but are faced with financial hurdles.

For instance, April quarterly sales more than doubled year on year which has  puts it on track to surpass the US$10 million annualised target for this financial year.

Despite the rapid sales jump, its net loss quadrupled to US$1.9 million during the three months to April. The company blamed the losses on its widening US distribution.

“The principal reason for the increase in net loss was the US$1.9 million increase in total operating expenses from the growth of the company and its staffing needs offset by the US$473,950 increase in total other income,” said company filings to the Securities and Exchange Commission (SEC).

Losses mean very little to coffee lovers who just want the perfect brew. Marley Coffee offers that, but even that has challenges based on the limited supplies of Jamaica Blue Mountain coffee.

The shortage is based on factors outside the company’s control led by the coffee rust disease. During the April quarter the company purchased just  US$65,000 worth of Jamaica Blue Mountain coffee. which accounted for a small fraction off its US$2.1 million in quarterly sales. Comparatively, the company bought one-third more Jamaican coffee a year earlier.

In fiscal 2014, Marley Coffee established a national grocery distribution network, increased its brand awareness and strengthened its international presence, including its entry into two of the largest chains in the US, Safeway and Kroger.

Since its launch online fans have been mostly supportive but some question the use of high quality coffee as a “quirk”.

The team will source beans from Mavis Bank Coffee Factory in Jamaica makers or JABLUM.

They will lightly roast the coffee to enhance aromas and well-balanced chocolaty finish and add to the stout.
“Thanks to Mosta’s diligent work, these 100% Blue Mountain beans were sourced from the renowned Mavis Bank Coffee Factory in Jamaica,” added the company.

Speaking about the collaboration, Mike Arquines, Roaster for Mostra Coffee said, “This opportunity is surreal. Prior to this collaboration, AleSmith was one of my all-time favorite breweries! Speedway Stout was my first “gateway” craft beer experience. It blew my mind because I didn’t know that beer could taste like this. My Mostra team and I feel like this has been a match made in craft beer and coffee heaven because it brings together two companies who pride themselves with being able to provide an un-compromised experience and product. Cheers to more amazing collaborations in the future!”

George Allen, General Manager for AleSmith echoed Mike’s sentiments about the collaboration, “AleSmith prides itself on sourcing the highest quality coffees for our single varietal Speedway Stouts. With this in mind, we reached out to local roaster, Mostra Coffee. Mostra shares our commitment to quality and bettering the customer experience. After several cupping sessions we found the perfect match in Jamaica Blue Mountain coffee. “

The beer goes on sale online (via Brown Paper Tickets) on Monday, March 3rd and AleSmith will host a release party at the brewery on Saturday, March 8th. 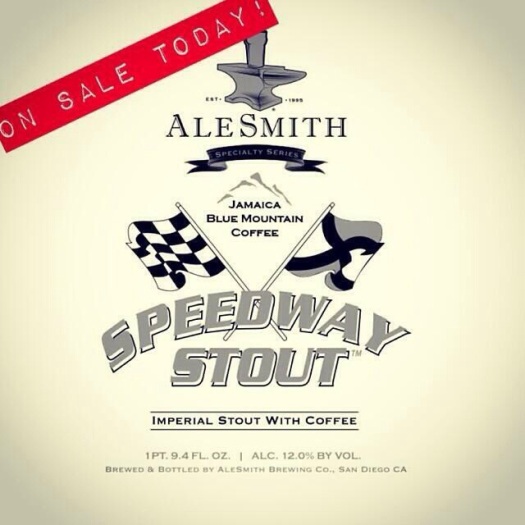 Coffee seedlings from the Blue Mountain range in Jamaica spawned commercial coffees from Kenya and Papua New Guinea in the 1900s.

Back in the 1700s coffee was introduced to Jamaica from Martinique according to the Coffee Board of Jamaica. At that time, Martinque a small French territory boasted 16 million coffee plants. Today it remains but a shadow of its former caffinated state.

Interestingly the same fate may meet its three descendant coffee territories as each suffers the one of the worst declines in nearly two decades.

However replanting efforts in Jamaica along with new farming practices in Kenya and PNG supported by loans from the World Bank and secondly its private sector lending arm the IFC respectively aim to resuscitate the sector.

For instance Jamaica’s coffee production is set to decline by half for the upcoming crop, experts indicate. Farmers blame rust disease and abandoned farms based on lower prices since the 2008 Western financial crisis. Ironically prices are now at record levels both on the premium coffee market and coffee commodities exchange . Farmers are clamouring back into the sector but it might take the length of an entire crop to rejuvenate coffee farms–thus creating disequilibrium and higher prices to consumers.

PNG coffee production declined by since coffee commodity prices dipped three years ago according to World Bank. Farmers not surprisingly abandoned farms. Prices are down some 23 per cent since the 90s data indicates.The World Bank will pump US$46 million in PNG agriculture in a campaign in part geared at rejuvenating the coffee industry hit with declining yields. The project aims to increase yields and hopefully pricing by replanting aging trees, some as old as 40 years, training in best practises, providing tools and paving farm-to-market roads.

Kenya the 20th largest producer of coffee globally has suffered from a 60 per cent drop in production since the 90s (a similar level as Jamaica compared over same period), IFC data indicates.

” Decreased productivity has been in part the result of reductions in government programs that provide technical advice to farmers. Small farmers—responsible for about three-quarters of Kenya’s coffee production—have been most affected by the reduction in government support,” according to the IFC in its 2013 document Rebuilding the Kenyan Coffee Sector,

The IFC project aims to train hundreds of key farmers to in turn train thousands in best practices. Its a serious move that ultimately aims at double farmer annual income

“The project is expected to reach 9,000 farmers and raise their yield per bush to between four and five kilograms of cherry, resulting in an additional 120 kilograms of beans. This productivity gain should help more than double the gross annual income of a typical grower from less than $200 to $475,” stated the IFC in its document.

The African state sells its own Kenya Blue Mountain coffee.

The good news is that coffee from these three nations should recover and provide a decent living for thousands of farmers, whilst providing the perfect cup.

Jamaica Agriculture minister roger Clarke wants coffee farmers in the jamaica blue mountain and high mountain regions of Jamaica to hike coffee yields amidst a record fall off in production.
“What would u say is the average yield per acre of coffee?” Asked the minister to coffee experts and large farmers in February 2014.
Head of amber estate Dr Lyn which recently supplied Starbucks responded to the agreement of other farmers: ” would say 30-40 boxes per acre.”
Contextually the industry in the past produced multiples.
“I would say a profitable farm would produce 100 boxes an acre,” lynx added. 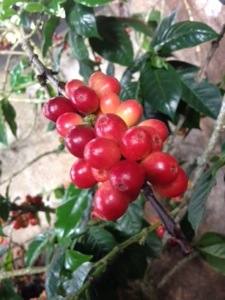 The coffee nation of Jamaica will hike imports amidst slashing its local production by nearly half to 20-year lows.
Consequently, Government aims to formulate a coffee importation policy.
“Its a troubling situation,” said John Minott, president of the Jamaica Coffee Growers Association, (JCGA) at the Coffee Industry Stakeholders Retreat on the weekend at the Jamaica Conference Centre in Kingston.
Rust disease, hurricanes and the abandonment of farms has reduced available trees and therefore production since the onset of the Western financial crisis in 2008.
“It’s not something that the JCGA is trying to promote but the stark reality is that today…we have to import coffee for certain segments of the market.”
Minott argued for an importation window during which replanting should occur.
Coffee imports hit some US$1.78 million in 2012 up some 23 per cent since 2008, according to data from the International Trade Centre (ITC) a joint agency of the World Trade Organisation and the United Nations.
Contrastingly, exports dipped by double-digit levels to some US$17.3 million in 2012, according to the latest Bank of Jamaica data. But the crop traditionally earned about US$25 million annually up to the onset of the financial crisis.